Khandvi is a popular Gujarati snack also known as pittod in Rajasthan and suralichi vadi in Maharashtra. Gujarati foods are totally incomplete without the dhokla, thepla, Fafda and khandvi. This is a popular snack or a side dish made in most of gujarati meals. It is made out of Besan flour/ Chickpea flour. Unlike handvo or khaman this dosent involve any soda in it.It’s super simple to cook and with a pressure cooker or an instant pot it is even more easier.

How is khandvi made?

Khandvi is usually made out of plain besan flour which is cooked with water, yogurt and with some spices. It is traditionally cooked in a pan to attain a thick consistency so that it can be thinly spread and tightly rolled on a surface and served. This cooking in the pan process requires a lot of time and skill to attain perfection. So I have made it simpler using a pressure cooker/Instant pot.

I have also added a little twist in it by adding spinach puree. The original plain khandvi is bright yellow and is made of plain besan/gram flour. This is spinach flavoured khandvi. It tastes delicious and looks pretty with the beautiful green colour. You can also try Pink khandvi with beetroot puree. The recipe below gives details about spinach khandvi, but you can alter it to make regular plain khandvi or beetroot khandvi. Just replace 1/2 cup spinach puree with 1/2 cup water for plain and half cup beetroot puree for pink khandvi.

What can go wrong?

To check if the khandvi batter is cooked take a teaspoon of batter on a flat plate or mat and try to roll it. If the roll holds well and it can be thinly spread the batter is perfect.

Let’s check the recipe for khandvi in detail. 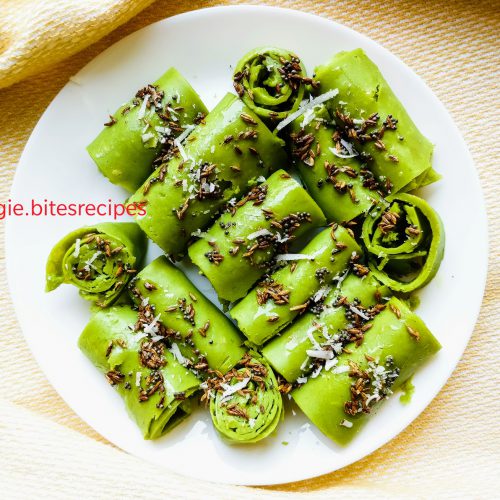 Rasika Dhadiwal @veggie-bites
Khandvi is a popular Gujarati snack in India. It is made of chickpea flour batter. This batter is well cooked and rolled thin into small pieces. It is also stuffed with coconut filling at times. This is a little variation in it. I have added spinach puree to it. It is now beautiful green in colour more healthy and delicious.
Print Recipe Pin Recipe
Prep Time 15 mins
Cook Time 15 mins
15 mins
Total Time 45 mins
Course Appetizer, Side Dish, Snack
Cuisine Gujarati, Indian
Servings 20 Pieces/Rolls

Coriander and grated coconut for garnish

Do check our other gujarati special dishes and their traditional recipes. Click on the direct links below.