Falafel has become popular among vegetarians and vegans as an alternative to meat-based street foods, often used to make veggie burgers. It has become more widely used as a source of protein. Just like the beetroot cutlets or the vada pav this is yet another popular recipe on the blog.

Other chickpeas recipes on the blog are

Falafel is a fried ball, or a flat or doughnut-shaped patty, made from ground chickpeas or fava beans or both. Herbs, spices, and onion are added to the dough. These fritters are found around the world as they are a popular vegetarian cuisine. Falafel balls are commonly served with Tahini and pita bread.

This middle eastern dish is popularly fried balls made from chickpeas or fava beans. I tried a bit healthy version by not frying but grilling it on a panini press using minimum oil. These therefore look like patties. They are incomplete without the favourite Tahini sauce (dip). We enjoy them both as an appetizer or as a main meal along with the pita pockets. Another popular dip hummus is also an alternative with these is on the blog.

Falafel are power packed with protein and lots of herbs. They are so very flavourful and delicious. My house smells aroma after cooking them!!

Let’s check the recipe in detail 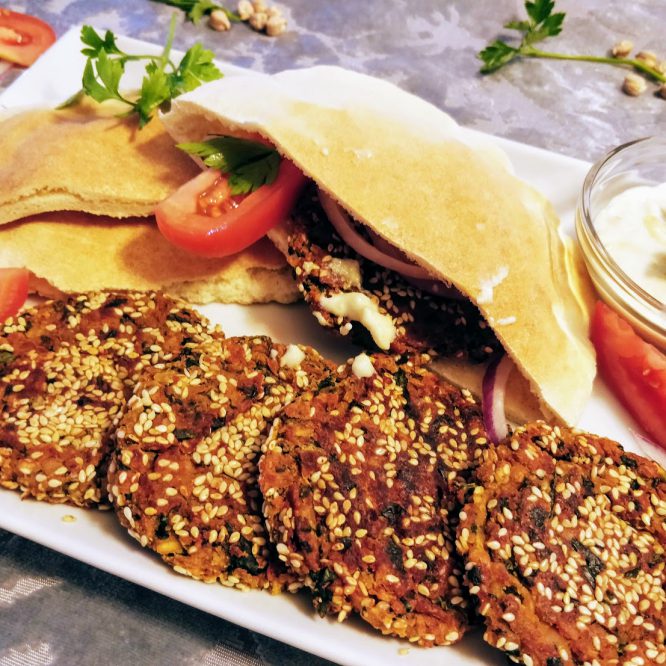 Do try other appetizers and snacks on the blog links below

Falafel is made from chickpeas which is high in fiber and a great source of protein. They contain a high amount of Iron, magnesium vitamin B and folate. The spices in it are a great antioxidants and can help in fighting blood sugar levels.