A hearty and a delicious soup prepared from broccoli stem and corn kernels. This soup is an ultimate healthy , super rich, creamy and perfect for a supper night. Its vegetarian and is a perfect family dinner.

This soup is particularly a no waste soup and the chowder is made from broccoli stem and corn kernels. The broccoli florets have been cut short and the stem is crushed and used for the chowder. Its super healthy and the stem gave a buttery and cheesy texture adding up volume. Along with it I also added crushed corn kernels which gave a nice thick creamy paste with some sweet flavour.

So because of the stem part being used I completely skipped the potato unless required in the recipe. This made it more healthy and I also did not use cheese as I used heavy whipping cream and the broccoli stem took care of most of it. This soup was a treat for us and we even ate the left over the other day. My kids helped me make it the other day again and we ate it until our taste buds were quiet. It was soul food.

Vegans can make it with soy milk and olive oil or just coconut milk. To thicken the soup you need to add coconut cream or a mashed potato then. It tastes great!!

Let’s check the recipe for the corn and broccoli chowder/Soup. 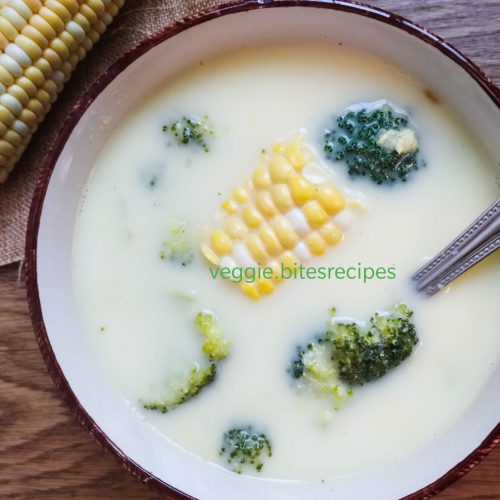 Rasika Dhadiwal @veggie-bites
This thick creamy stew is a preparation out of corn and broccoli. The thick soup is a preparation out of corn kernels and broccoli stem along with heavy cream. It is seasoned with the tangy lemon and spiced chilli and tastes thick, creamy, sweet, sour and spicy. The variation is taste is worth giving a try.
Print Recipe Pin Recipe
Prep Time 15 mins
Cook Time 20 mins
Total Time 35 mins
Course Appetizer, Soup, Starters
Cuisine American
Servings 4 People

1 thought on “Corn and Broccoli Chowder”