Rasgulla is an indian dessert where in Chenna (cheese balls) are cooked and soaked in sugar syrup. These are super spongy and juicy sweet delight. Rasgulla originates from the eastern parts of the Indian subcontinent. Having its origin in Orissa and Bengal it has variations in preparation and taste different in different places.

Chenna/paneer is a protein made by curling milk using lemon or vinegar. This cheena is then strained to dry up and mixed with sugar and cooked to make rasgullas. When we mix this chenna in reduced milk we can make another dessert like the Kalakand. Chenna is also popularly used for sandesh and chenna poda. Chenna/paneer kheer is another popular dessert.

Paneer is yet another versatile foods. A number of savoury dishes like the shahi paneer, saag paneer, Pinwheel paneer, paneer fried rice and so on can be widely made. Paneer is a great source of protein.

Rasgullas are made from ball shaped dumplings made from Chenna (cottage cheese) , semolina and Sugar cooked with sugar or jaggery syrup until the sweetness permeates the dumplings to make it light, fluffy and juicy. These are known by various names like Rasagulla, Roshogolla, Rasagola, Rasbhari etc . It is extremely popular in most of the Indian traditions and festivals.

Some of my Traditional Indian dessert recipes are

How are rasgullas made?

– Rasgullas are made from Chenna made by curdling milk. (also known as paneer) and the balls made from this chenna are cooked in a sugar syrup to cook and make it fluffy and juicy.

Check out other paneer recipes on the blog

– The main challenge with rasgullas at home is making them soft and not chewy.

– This is no rocket science! It’s a super easy and simple procedure to follow.

– Always cook the rasgullas in a wide pan to allow room for the balls to grow in size, only then they cook well and open pores to allow sugar or jaggery syrup to penetrate.

Making Rasgullas has become our regular task now. My kids love to mould the balls with me. It’s so much fun for them to see the balls increase in size… they simply hog on it!!

Let’s check out the details of the recipe along with the step by step pictures. 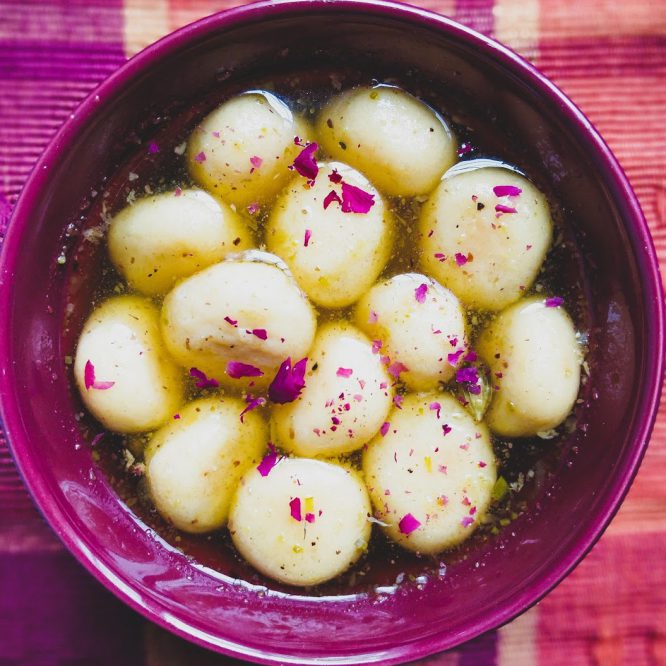 Rasika Dhadiwal @veggie-bites
Rasgullas is a popular indian bengali dessert which are made from Chenna made by curdling milk. (also known as paneer) and the balls made from this chenna are cooked in a sugar syrup to make it fluffy and juicy.
Print Recipe Pin Recipe
Prep Time 30 mins
Cook Time 30 mins
Total Time 1 hr
Course Dessert
Cuisine Bengali, Indian, streetfood
Servings 20 pieces

For the Chenna dough balls

For the syrup add 2 cups of jaggery powder to 3 cups of water and boil it. Cook the Chenna balls in it covered for about 15-18 minutes. They might not look the same white in colour. but these are super healthy because of the jaggery.

Jaggery rasgullas are known as Nolen Gur rasgullas. They are high in protein , rich with iron and fibres.

Rasgullas are a great source of protein as it’s made from chenna. They are high in carbohydrates with sugar. Weight watchers and health conscious can cook them in jaggery syrup.

Also check our other desserts on the links