This delicious blend is cooked with a lot of butter and spices(pav bhaji masala) and is served with pav(dinner rolls).

I so miss the Maharashtra (Mumbai and Pune) Pav bhaji here in the USA. Typically the one prepared at the chowpatty. Another favourite of mine is the vada pav.

Pav Bhaji is our favorite weekend fast food menu and we have typical joints in our hometown who serve the best of it. Specially the ones made on a huge pan and freshly served along with the dollop of butter is so mouthwatering.

My mom had learnt the typical pav bhaji made at the Mumbai joints. Wherein they use only onions, tomatoes, potatoes and a little capsicum. But to make a healthier version she always added a bunch of other vegetables like cauliflower, carrots etc. to make us eat all of them secretly. Pav bhaji was the best source to mashup and hide all the possible veggies and she used to make it like a pro. We never realised the mix and ate all while complimenting the yummy bhaji and slurping our fingers.

*However you can pop in the frozen veggies you have too. When in hurry and dont have all the ingredients I just remove the mix veggie frozen packet and cook my bhaji with that.*

My kids cannot have too spicy so I have a trick to colour. I don’t not add chilli paste.

Instead I boil a piece of beetroot along with rest of the veggies and it gives a natural and healthy beautiful colour to the bhaji.

Le’ts check the recipe for pav bhaji in detail. the following recipe is both the regular and the instant pot ways. 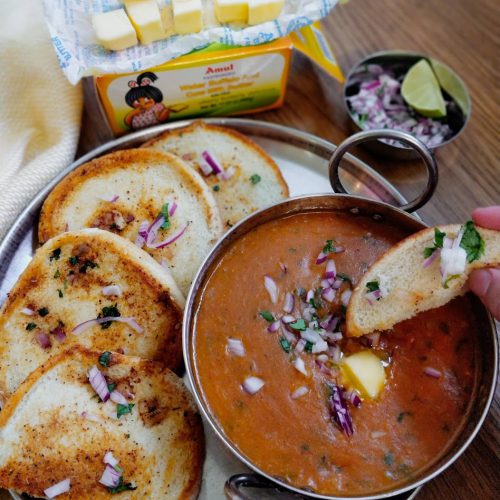 Now to serve the pav bhaji

We would like to hear from you. If you try this recipe please let us know in the comments below.